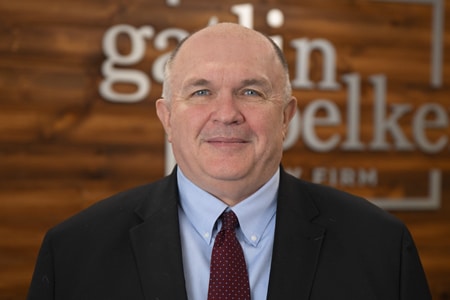 David started his legal career as a prosecutor, working as an assistant county attorney in Breathitt County, Kentucky. There he found a passion for helping people, which has helped shape and define the way he practices law to this very day. Eventually, David found his way to Northern Kentucky, where he worked for one of the area’s biggest firms until 2008, when he left to form his own firm. In 2019, David joined Gatlin Voelker, where his practice includes representing clients in banking, real estate, corporate, probate, and general litigation matters. David is admitted to practice both in Kentucky and Ohio. David’s philosophy has always been to treat each client with respect and respond timely to their questions and concerns.

Since 1999, David and his family have made Independence their home. David is the proud father of Adam, who attends NKU, and Ryan, who is a student at the University of Louisville. Besides having served as a deacon in his church, David was also involved in the leadership of his sons’ Boy Scout troop, and was active in the Simon Kenton Band Boosters.

David attended the University of Kentucky as an undergraduate, and graduated from the Salmon P. Chase College of Law.